Kill the Dragon: Get the Girl 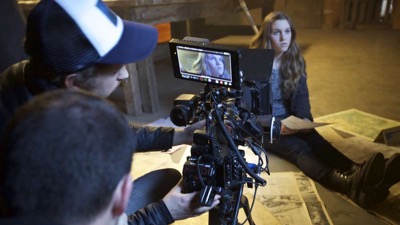 A New Breed of Young Artists

If Sony Pictures, a wheat farmer, and

a classical Christian school came together,

Inside an old barn located on the rolling hills outside of Moscow, Idaho, director Darren Doane crouches behind a camera. Lights and sound equipment stand among newspaper clippings, rusty coffee cans, and car equipment. On the floor lies a pile of firewood covered by black tarp—a pile that will, with the magical touch of CGI, transform into a dragon.

As cast and crew of the upcoming action adventure movie Kill the Dragon: Get the Girl shoot the last scene for the day, the director’s children play in the background. The actors wait patiently to deliver their lines while parents look on from the side. It’s not the typical environment you expect on a movie set. Here, the only drama comes from the script. What accounts for this difference in atmosphere? One explanation is the largely Christian cast, most of whom received a classical Christian education.

You wonder how these decisions are made. It just so happens that word is spreading about schools generating exceptional students. Sony needed a country setting and young actors, and saw in Logos and New Saint Andrews a great place to find hard-working kids who already knew how to tell a good story.

The education of these students played an important role for director Darren Doane when it came to the casting. He wanted actors who could understand the vision ofthe story. “I thought it would be so awesome to have a cast that truly believed in the message of it and, later, when we went on to do promotions for the movie, that they’d be able to articulate that hope.”

According to Doane, the message behind Kill the Dragon: Get the Girl is the gospel, the triumph of Jesus defeating the devil and rescuing His people. The students are tracking. Summer Stokes, a junior at Logos School (with an uncannily star-like name), testifies, “It really represents what we’re supposed to do in our lives as Christians—stand up to the devil and don’t back down. Push back.” Both Saint James and Tom Petty say, “Amen.”

While two of the students have acted in school plays, Caleb Warner, a junior at New Saint Andrews College, is acting for the first time. When asked about how he interprets his character, he refers to the classical model of a child’s development. Warner describes his character, Tommy, as “a cynic and a skeptic. He enjoys picking fights, especially if it’s about truth and the nature of reality. The character is based on the junior high kid in logic level.” Warner goes on to explain his character as the argumentative kid in the Pert stage on the cusp of breaking through to the stage of Rhetoric.

Danny Bradley, a senior at Logos School with mad three-pointer skills on the basketball court, takes a different approach to understanding his character. For him, it’s the stories. “I’ve been reading stories like this, where good overcomes evil, all my time at Logos,” Bradley says. “So I feel like it was really easy to fit into my role because there are a lot of characters that I’ve read that are like that.”

For Caleb, Summer, and Danny, acting is just one extracurricular activity among many—mock trial, basketball, volleyball, drama, and internships. “I had a crazy schedule,” said Danny Bradley. “So I had mock trial. I had basketball practice. I had the movie and then I had school.” But despite hectic schedules, these students thrived in all their activities and on the movie set.

Producer David Shannon explains, “They come in and they give one hundred and twenty percent all the time and it’s rig- orous. It’s not easy. They haven’t dropped one thing that they’re doing in school.”

Darren Doane describes these students’ work ethic and talent: “They could memorize their lines because I think almost all of them do mock trial. They’ve been trained to give presentations and they’ve been trained to stand up and present ideas and be confident. The students walked in and it was like it was just one more extracurricular activity. I was blown away. You don’t know how easy it is to make a movie when the cast steps on set and they know their lines, hit them, and ask, ‘What’s next?’ ”

Co-producer David Shannon praises the students’ godly character as a reformational contribution to the business. “This is a hard job,” says Shannon. “Sometimes people can come off having the wrong idea about it, but it’s hard. For them [the actors] to be just as joyful as the first day they started says a lot. It’s hard to get that type of character in this business, especially for kids.”

These young actors entered the movie scene lacking the typical set of qualifications. Instead, they brought a deep understanding of story, especially the gospel, and an exceptional capacity to work hard. These qualities, it turns out, produce good actors. The students’ work and education left an impression on Kirk Cameron as well. Once a child actor himself and a continuing presence in the acting world, Cameron had this to say about the students: “It’s wildly refreshing for a Hollywood actor to see firsthand how a Christian education with a biblical worldview and a supportive family-based community builds a different breed of young artists. Caleb, Summer, and Danny are not only talented students, they are shining examples of faith, character, and courage.”

Kill the Dragon: Get the Girl was written by Darren Doane (also the director) and Chet Hervey and was produced by Hervey and David Shannon. Shot in Idaho’s beautiful Palouse mountain wheat country, the movie’s release date is still to be determined.